Some of the country’s top sports stars teamed up with the next generation of champions to try the world class facilities at Lee Valley Hockey and Tennis Centre – the latest London 2012 venue to launch in Queen Elizabeth Olympic Park earlier this week (Tuesday 17 June).

Just days after competing at the Rabobank Hockey World Cup, members of the England Hockey Women’s and Men’s teams including Tom Carson and Kirsty Mackay joined British Wheelchair Tennis Paralympic medallists Jordanne Whiley and Lucy Shuker to officially open the £30 million centre that has been adapted from Eton Manor – the only purpose-built Paralympic venue.

Local schools including Chobham Academy, University of East London’s tennis club, East London and Waltham Forest hockey clubs and the east London based FRE Flyers community group were among the first to test out the new facilities which feature striking blue tennis courts of the same standard as those used in the US Open and two floodlit, international competition standard hockey pitches with a stunning Union Jack design.

“Lee Valley Hockey and Tennis Centre provides top class facilities for the next generation of hockey and tennis champions – the stars of tomorrow will be discovered here.

Our programme puts these high quality courts and pitches within reach of players of all standards, from complete beginners to international athletes.

And with the first major event just three weeks away, you’ll be able to relive the drama of London 2012 as the world’s best hockey players return to Queen Elizabeth Olympic Park for the London Investec Cup.” 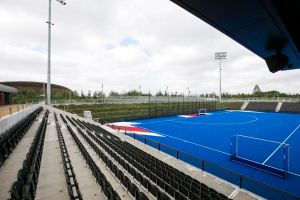 Members of the public will have their first chance to take part in both sports at Lee Valley Hockey and Tennis Centre on Saturday 21 June when the venue will host a free Family Fun Day.

The fun day is part of the Great British Tennis Weekend which is supported by the Lawn Tennis Association and Tennis Foundation. Visitors can try Cardio Tennis, a great way to burn off excess calories, Mini Tennis, a national scheme to teach children core tennis skills and various forms of Disability Tennis. There will also be a chance to play Quicksticks, aimed at introducing hockey to seven to 11-year-olds, brought to visitors by England Hockey.

“This is great news for Londoners, which adds to the spectacular suite of world class sporting venues available for their use at Queen Elizabeth Olympic Park. From cycling and BMX, to swimming and diving, hockey and tennis and many other sports besides, this is an unrivalled set of facilities delivered thanks to London’s Olympic and Paralympic Games.”

“Today is another great example of the important legacy left for sport by the London 2012 Games. British tennis is delighted to be working in partnership with the Lee Valley Regional Park Authority and England Hockey to deliver a world class facility that will not only host major sporting events, but also support the local community playing regular sport. We want more people in London playing tennis all year around, and this fantastic new venue will support this goal.”

“We have an exciting few years ahead of us in terms of the major international events we’re hosting at this stadium, and having a facility like this is a fantastic tool for us to engage the public with our sport and really stimulate some National pride in supporting England’s hockey teams.

It’s also a huge benefit to the local clubs and schools in the area who’ll use the pitches, which is of utmost importance.”

Visitors will be able to try hockey from £4 per person. Clubs and schools from across the region are booking the pitches for training and matches every day of the week.

Lee Valley Hockey and Tennis Centre will be a hub for disability tennis and a base for tennis community activity. Hockey clubs from the region will train and play matches on the pitches and there will also be introductory sessions for players new to the sport.

Visitors will be able to:
• play Rush Hockey and Quicksticks, adapted versions of the game aimed at getting more players into the sport for £4 per person
• enjoy hockey and tennis coaching sessions to improve their game
• play club hockey
• hire tennis courts from £5
• take part in community tennis programmes including Cardio, Mini and Disability Tennis

Those who prefer to be spectators can cheer on the world’s best at this spectacular venue. The primary hockey pitch has a capacity of 3,000 which can be increased to 15,000 for major events. The centre will host the:
• EuroHockey Championships in 2015
• Women’s Champions Event in 2016
• Men’s World League Round 3 in 2017
• Hockey Women’s World Cup in 2018.
• The most important international tournament in the wheelchair tennis calendar, the NEC Wheelchair Tennis Masters takes place here in November of 2014, 2015 and 2016.

No matter what standard, there will be an opportunity to play hockey and tennis with a range of community, club and elite programmes available.

In addition, there will be a multitude of events throughout the year including an annual schools festival where school children from across the region can play for free as well as school holiday activities.

Visitors can sign up in advance for tennis activities at the free family fun day which will run from 10:00 to 16:00 on Saturday 21 June at www.greatbritishtennisweekend.com or just turn up on the day and enjoy playing hockey and tennis.

For more information go to: www.visitleevalley.org.uk/hockeytennis