The Welsh women’s hockey international squad are currently gearing up to host one of the biggest tournaments the country has hosted for a while.  The EuroHockey Championship II is set to burst into action on 6th of August in Sophia Gardens, Cardiff (the home of Welsh sport) and it is set to be a spectacular event. With Welsh ladies at home, they are hoping to use the surge of encouragement from the crowd to lift them through the group stages and hopefully play for a top spot.

During pre-tournament campaigns, the Welsh have played a variety of test matches, where they have experienced a phenomenal amount of success.  They are unbeaten in the last 6 games, beating France 3-0 in their test series, and also beating Scotland for the first time in a decade.

With all this excitement building Jo Westwood, a fundemental part of the Wales international hockey team’s driving force, answered some of our questions.  Find out what motivates her, how she prepares for her highly esteemed international career and what she’s expecting from playing against a range of European counterparts at home.

Hey Jo.  Thanks for taking the time to catch up with us.  Let’s start with telling us why you initially become involved with hockey?

When I was younger I used to just play every sport I could. Football, tennis and cricket were the main ones of choice; and I played with my brother. I was not introduced to hockey until high school where we played it in our lessons and I then started to play it as an extra curricular activity. I always looked at it to be similar to batting in cricket but you just run around a lot more. I started playing for a club (Whitchurch Saints) because my friend asked me to go along with her.

That’s common for many people, starting out at school! Hockey seems to definitely on the rise here in Wales, what do you think the main factors for that is?

The success of the Olympics with the women winning the Olympic Gold in Rio definitely has a major factor in that. When you speak to people now about hockey, even if they do not know the sport, they all watched the GB women win Gold. Since then we (as a Wales Women team) have also been performing in tournaments which matter and starting to be noticed in Wales. Also, with a few girls in the GB system already hockey is putting itself on the map in Wales.

That was definitely a pivotal moment in hockey, and for women in sport in general, I think. What do you enjoy the most about playing internationally compared to club level?

Whilst playing internationally you are representing your country and playing teams from across Europe, and most recently, from across the world too. I am sharing the pitch with a group of girls who take pride in every performance.  We play with the feathers on our chest, and that means something.

The Welsh are really a proud nation. So, I know that most of the women who play internationally have full time jobs too – what are you up to when you’re not on the pitch?

When I am not playing/training I am working as an mortgage administrator at a local company in Cardiff. We take our holiday leave to play in our international tournaments and very thankful to each and every company for supporting all the players in the team and understanding of the commitments we have outside of hockey.

That is incredible that you have to take holiday leave in order to play -what commitment! How do you support your international career as well as your other stuff?

This year we have had a very busy year with our hockey successes so most of everyone’s hobbies have had to be put to the side for now. Each player is different and they will make time for what is most important to them. I do most of my sessions in the morning so it just allows my evenings to come home and have dinner with my family instead of an hour later every evening.

Everything is possible if you plan, organise and make time for the things you love and cannot live without.

Some of my best friends are the people I play hockey with day to day, and internationally, so I am lucky enough that I get to see them all very regularly and spend a lot of time with them exploring places. We all have friends who are very understanding of what we do and why we do it so it makes it a little easier for us going away all the time.

Sounds like you have a great support system in place. So, how have you been preparing for the EuroHockey II competition, personally and as a team?

We do a lot of our training remotely so almost every player trains independently or in a smaller group. This needs you to be high motivated but we keep in contact with each and know at the back of our minds everyone else is doing the running or hockey sessions which motivates you too. As a team we start to meet up more regularly to fine tune things before the big tournament. We have had maybe one or two weekends off the past two months or so preparing for what is majority of players first home European tournament.

That must be challenging, training remotely.  Do you have any fitness tips for up and coming hockey players who want to improve their game?

I would say fitness is one of the most important part of the game now because it is just getting quicker and quicker. Some days you will be surprised but you will play like you have never held a stick before but what you will have is fitness to run round and cause carnage for the opposition so there is always something you can do. I know most young players in Wales are given a strength and conditioning programme if they are in the 360 programme, which is something I never had. This will really help you focus on the fundamentals you need in hockey. Every person knows what they are good at and are not good at; you could be quick or you may be able to run for long periods of time. Carry on working on that but also give more focus to those parts which need improving.

What are you most looking forward to ahead of the EuroHockey Championship II in Cardiff?

I am looking forward to knowing that the majority people of watching and supporting our hockey are there to watch us play. Having the support behind you is like having an extra player on the bench.

Home advantage and crowd support seriously does make a difference.  Who do you think will be your biggest challenge?

That is a difficult question because every single team has different style of playing. We have not played Belarus for a long time so they will be an interesting side to play for the first time and a good challenge in our group games. Italy are the highest ranked team in the tournament so everyone will be keeping an eye on them with high expectations to perform. 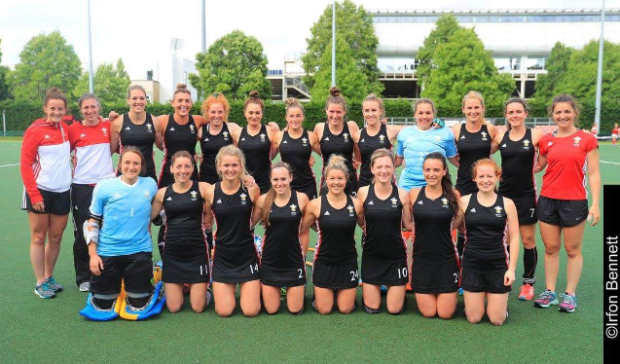 Where do you find your inspiration to improve on and off the field?

I am inspired by all my team mates to improve on and off the pitch. We are all improving vast amounts and you do not want to be left behind so you push harder and harder every training session. As every player is so different there are so many things we can all learn off each other on and off the ball. We all have high expectations of each other and are very accountable if we are not performing.

Do you have any advice for up and coming hockey players wanting to take their hockey to the next level?

I think you just need to enjoy what you are doing because if you do not enjoy playing then it will make sessions harder mentally and it is not worth it. Also, basics are one of the most important parts of the games now and they can always be improved. If you can pass and trap the ball you are already half way there.

Thanks so much Jo – looking forward to following you during the EuroHockey Championship II tournament next week (August 6th – 12th, 2017).

For more information, check out: